Music Fun on the Internet

Summer is practically here -- a great time to find new ways to connect with music and have fun.  Have you ever played a music video game?  Creatingmusic.com has some fun stuff...  Click around and explore the many possibilities music has to tap into your creative side.

Playing with the C Scale

And here's my favorite (which lets you go as crazy as you would like).  This "game" gives you a whole new way to think of writing music and to experiment with sounds.  Explore all the buttons!

Creating your own Music

Have you found a place on the internet to experiment with composing your own music?  Share your findings!  And have a great summer!

Posted by Jessica Spieser-Landes at 4:30 PM No comments:

Throughout human history, people created new styles and forms of music.  Sometimes the music was new because someone had built a new kind of instrument.  Sometimes the music was new because someone used a new kind of rhythm.  In today's world, technology has made it possible to do even more new and creative things with music.  Computers allow us to change the sound of our instrument at will, to record ourselves anytime, anywhere, and also to choose exactly which parts of a recording we want to put in our finished piece.


A performance that is recorded using modern technology (like a digital recorder) is called a "track".


The person who sets up all the microphones and equipment and records the music is called an audio engineer.


The cool thing about using tracks is that now one person can record many tracks and mix them together so that it sounds like a group of people playing.  You could write a song with several parts, but then record each part as a track.  When you mix them together it will sound like you are playing them all at the same time!  You can create special effects to add to your music this way as well.


Here is an example of two musicians using tracks to record a piece.  Jon Schmidt played all the piano tracks and Steven Sharp Nelson played all the cello tracks (and the drum).  Notice how they create percussion sounds using their instruments.  These knocking sounds create a beat for their music.
You will notice that Mr. Nelson has several different cellos.  Some of them are electric cellos that can make unique sounds like an electric guitar.


They have also combined modern music by Michael Jackson with classical music by Wolfgang Amadeus Mozart.  This piece is called "Michael meets Mozart".

**For Laura's Piano Students:  Click HERE for the summer schedule appointment calendar.
Sign up now to reserve your lesson slots!

Posted by Laura Kautz Nguyen at 2:00 PM No comments:


One of my students asked me, do violins play jazz? Yes! Using the same instrument as we use to play classical music and fiddle tunes, there are all sorts of jazz violinists out there. Regina Carter is a leading jazz violinist, heard here in this video with the Ray Brown Trio (piano, drums, bass). When you listen, how can you tell this is jazz music?


Because jazz has so many different styles, there are also numerous styles or ways to play jazz violin. Here is a link to gypsy jazz, or "jazz manouche," that largely started in France influenced by the Roumanian gypsy population. Notice the different sound -- here the guitars get a real workout because they provide the rhythmic drive or pulse. If you compare this to the Regina Carter recording above, can you tell which two instruments are missing here? I'll give you a clue -- in this recording there are three guitars, a violin, and a bass.

Posted by Jessica Spieser-Landes at 3:00 PM No comments:

I know you are all working on your drawings, paintings, or other creative work using Vivaldi's music as inspiration, but I simply had to share a piece of music I was introduced to today.


The Piano Guys are a unique group who are having fun creating modern re-makes of classical pieces, and classically influenced re-makes of today's music.  The following piece, "Peponi" (meaning 'paradise' in Swahili) communicates to me what the spirit of music is...the common tongue of humanity...and the joy and inspiration it brings to us all.
I hope you enjoy this wonderful work and amazing video!


(Click on the video when it starts playing to see it in a larger screen.)
Posted by Laura Kautz Nguyen at 12:22 PM No comments:

Happy Spring, everyone!  The weather is warming up, and the flowers and trees are blooming early this year.  Every morning I awaken to the sound of the robins and other birds creating their music outside my window.  Many composers have been inspired by the spring season and have written pieces to describe what they hear, see and feel.
One of the most famous pieces of this season is Antonio Vivaldi's "Spring" from his work called The Four Seasons.  In the performance below, world-famous violinist Itzhak Perlman performs with the Israel Philharmonic Orchestra.


Can you hear the the birds calling back and forth in the first movement?
Vivaldi also creates the sound of thunder during a rainstorm.  Can you hear it?
(Hint:  Listen for the tremolo in the strings.)


Draw or paint a picture as you listen to the music.
Here are some questions to help you as you draw:
What kind of picture does the music make you think of?  What colors do you think fit with the music?
Please bring your drawing to your next lesson so that we can share our experience together!
(Note:  The drawing does not have to be any specific picture.  You can even do an abstract piece of art in which you simply make shapes or lines using colors inspired by the music.)


"Spring" from The Four Seasons by Vivaldi performed by Itzhak Perlman and the Israel Philharmonic.
(Please click on the link above to find the YouTube video.  I was unable to embed this video.)

After you have created your own drawing, take a look at this video of sand art done to the same piece of music.  The artist is Ferenc Cako.

Posted by Laura Kautz Nguyen at 2:00 PM No comments:

Music is an amazing thing.  It is sounds, put together in a way that creates something enjoyable for us to hear.  There are thousands of instruments that we have invented to play music on.  In the last blog post you saw how thumb pianos, made out of wood and metal, can make interesting and beautiful music.  Did you know that we can make music with lightning?

A sound is really just the movement of air, which our ears pick up as vibrations in the eardrum.  Electricity moves the air in vibrations (or frequencies) that can be altered to move at a speed that our ears can pick up as sound.

In the following videos, you will see Musical Tesla Coils create lightning that we hear as well as see!

Popcorn performed by The Masters of Lightning on their "Zeusaphones".


The skinny poles in the middle of the stage are light bulbs that glow from the electricity in the air.

Here is another video by ArcAttack on America's Got Talent.  This group actually interacts with the lightning by wearing special suits that make the electricity go around them.

You can play all kinds of music with lightning....even J.S. Bach!  Here is Bach's famous Toccata and Fugue in D Minor performed by The Masters of Lightning.


Want more information about how this works?  Click here for a brief explanation from ArcAttack members.

Get a really in-depth, technical explanation from Steve Ward, a man who pioneered this idea, here.  (For those parents or older students who really want to know.)

Posted by Laura Kautz Nguyen at 3:00 PM No comments: 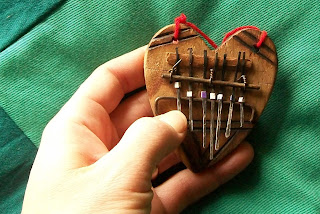 Recently a student gave me the surprise gift of a small thumb piano. Have you ever seen one? Have you ever heard one played really well? An instrument that makes sound by vibrating when it is plucked, the thumb piano comes from Sub-Saharan Africa and has many different names there (kalimba and mbira are two). I hopped on youtube and found the following amazing clip of Ruth from Uganda playing the thumb piano with Bela Fleck on banjo. Musicians the world over make beautiful music that can connect with people everywhere. Music is our common language! Take this chance to listen to excellent music from a corner of the globe far from us in miles but close to our hearts thanks to music. Posted by Jessica Spieser-Landes

Posted by Jessica Spieser-Landes at 3:00 PM No comments: